For New Humanity NGO the Time for Peace is Now 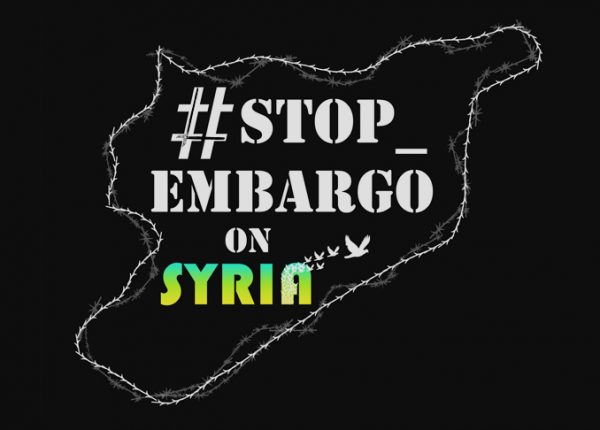 Click HERE to watch the petition support videos and testimonials from Syria.

Reports of the Corona Virus pandemic infection are coming one after another, highlighting the fact that we are one race, with the same genetic heritage, the same vulnerability of becoming ill, one humanity.

However, when faced with disease, we are not all equally suited: people living in poverty or undergoing the tragedy of war confront it with a serious limitation.  As many do, the Syrian people, still at war, today face the emergency while crushed by a heavy total embargo, sanctioned by the governments of the USA and Europe.

After our universal experience of pain, we can no longer turn our faces away. We can do something and do it now!

We drafted an appeal to be presented to the General Secretary of the United Nations, and European Institutions to, at a minimum, temporarily lift the embargo on all medical care and financial transactions to enable the restocking of supplies.

This is a first step, to be followed by work on other commitments for other peoples in the same situation.

We need you and your commitment to multiply the strength of this “summons” to the commitment for peace.

Please consider signing the below petition and sharing this appeal with others.

If the Covid-19 disease can destabilize populations in the most developed and organized countries, what can happen to an unspecified number of women, men, young people, and children in countries at war for years like Syria, a country brought to its knees, in part,because of the embargo?

This petition is a firm exhortation to reconsider the embargo placed on the Syrian government and to take timely and concrete actions to provide effective help for the Syrian people to fight the COVID-19 pandemic.  During this time of overwhelming difficulty, this petition expresses a firm warning to take, as a matter of urgency, all the necessary steps before it is too late.

Our appeal also follows the recent message of Mr. Antonio Guterres, Secretary General of the U.N.: “our world faces a common enemy: Covid-19.The virus does not care about nationality or ethnicity, faction, or faith.  It attacks all, relentlessly.  Meanwhile, armed conflict rages on around the world.  The most vulnerable — women and children, people with disabilities, the marginalized, and the displaced — pay the highest price. They are also at the highest risk of suffering devastating losses from COVID-19.” International sanctions further accentuate the vulnerability of the Syrian people. Following the motivational reason of this call for a ceasefire, these sanctions should also be, at a minimum, temporarily suspended at least to allow for the shipment of healthcare supplies and materials intended for medical treatment and for the funds needed to pay for them.

Recently, Pope Francis urged nations to respond to the appeal, saying, “I join all those who have accepted this appeal and I invite everyone to follow up by stopping all forms of war and hostility. … The joint commitment against the pandemic may lead everyone to recognize our need to strengthen fraternal ties as members of the one human family … In particular a renewed commitment must be given to the leaders of nations and other interested parties to overcome rivalries.”

It should also be pointed out, that this appeal does not intend to align with any particular political positions and, on the contrary, intends to go beyond partisanship, since the aim of safeguarding the Syrian people goes beyond any political or ideological position.

As both Mr. Guterres and Pope Francis said, we are all members of one human family.  If we can help the people of Syria already exhausted by a decade of war, it is our precise moral duty to do so, and quickly, to avoid being complicit in a catastrophe which would forever bring shame on us all.

We have the possibility to write a page of history of pride and not of shame:

Brief description of the current situation.

On May 17, 2019, the European Council extended the EU’s restrictive measures against the Syrian Government until June 1, 2020.  Apart from the specifics of the decisions taken by the EU and Washington, objectively, as a result of these sanctions, the situation today in Syria is grave.

As a result of the embargo, the country’s economy has collapsed dramatically. According to a UN report published in May 2018, GDP fell by as much as two thirds and, according to that report, the causes are largely because of the economic sanctions imposed on Syria, not only due to the conflict.

Medicines and medical equipment are also in short supply because of the embargo, so hospitals – those which were not bombed – are struggling to serve citizens in need of treatment.  Before the war, Syria had one of the most advanced health systems in the Middle East. Moreover, before the sanctions, the country was self-sufficient in a number of vital medicines that Syria previously produced.

To date, the restrictive measures due to the embargo have severely damaged Syria’s ability to produce, rather than purchase medicines, equipment, spare parts, and software. Foreign companies are unwilling to enter into transactions for fear of being accused of violating the restrictive measures.  (See “End of mission statement of the Special Rapporteur on the negative impact of unilateral coercive measures on the enjoyment of human rights to the Syrian Arab Republic, May 13-17, 2018”).

Objective of this petition

For years, the civilian population in Syria has been living, or rather, surviving in this context, with many difficulties, including those caused by the embargo against it. However, today, in addition to the conditions of poverty brought about by the sanctions, there is the further threat of the coronavirus. This time, the Syrian people are facing an even more devious and nefarious enemy, an invisible enemy that claims victims among the weakest.

That is why, in our view, the embargo and the sanctions appear, at this moment in history, to be cruel and unacceptable, because they deprive women, men, young people, and children of the aid and support that can prove vital for them to survive the real danger posed by the Covid-19 disease.

Today, we must consider that the rationale behind the embargo has become obsolete, since preserving the lives of the people of Syria is enormously more important.

If there is only one lesson that this pandemic may have taught us, it is the importance and the obligation, to reach out to those most in need of help and support.

We are at a time in history when we must have the courage to make unprecedented decisions, because the situation demands it. We need to take a common stand for the sake of the Syrian people and for all human persons in war-torn countries at risk from this pandemic, especially the most vulnerable.

Therefore, we call for all competent authorities, various associations, and individuals to join this petition in solidarity, regardless of their position on the Syrian conflict. The focus must be on the people, the ordinary people, who must be adequately supported to face this latest trial.

For the above reasons, we call for the immediate withdrawal of the economic embargo against the civilian population in Syria (and possibly actions to safeguard all people “in all corners of the world” facing similar conditions.) We call on the European Union and the United States of America to promptly remove any legal obstacles that could prevent the peaceful exchange of goods and money needed by our sisters and brothers in Syria to combat the COVID-19 pandemic.

Here is a list of some Associations and People that have co-signed the Petition, sending their support via email messages: