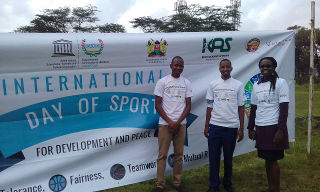 “This was a good one!” commented the Master of Ceremony. It was almost at the end of the International Sports Day for Peace and Development in Nairobi. A young man from Marsabit in Northern Kenya, Johnston Duba – part of the delegation of New Humanity – had just shared how he used sports to promote peace among conflicting ethic communities in his region.

Although his contribution was scheduled at the end of a long morning of sports and speeches, he managed to capture the attention of approximately 100 children and youth from different countries, social and economic backgrounds, as well as, different organizations and personalities who participated in this historic event. Johnston managed to move the hearts of many people with his less than ten minutes testimony despite the fact that the participants were already exhausted and hungry. Several people commented that they were encouraged and that it is indeed possible to achieve peace even in very complicated circumstances. Informal conversations during lunch break offered the delegation an opportunity to share with invited representatives of UNESCO about two major projects that the New Humanity is currently proposing on an regional level: “Sports4Peace in Eastern Africa – Educating to Peace through Sports and Games” and “Back to Africa – Together for a New Africa”. 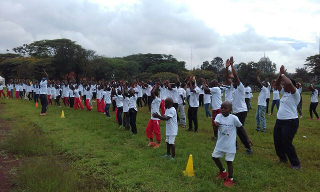 The International Sports Day is an initiative of the United Nations Educational, Scientific and Cultural Organization (UNESCO). It was celebrated in Kenya in unity with all parts of the world on the 6th of April, 2018. In addition to other participants, the event was attended by various personalities representing the National Commission of UNESCO in Kenya (KNATCOM), the UNESCO Regional Office East Africa, UNHCR, the Russian Embassy, some Sports and Talent Institutions, as well as, various Children Homes.

New Humanity had the privilege of participating in the sports day courtesy of an invitation from UNESCO/KNATCOM representatives with four representatives: the above mentioned Johnstone Duba, Mr. Ernst Ulz, Eva Maria Anyango, and Gilbert Makokha.

The guest of honor at this event was the former champion athlete and the ambassador for peace in Africa, Tegla Loroupe who gave a speech on the importance of sports in promoting peace and development. The representative from other organizations also addressed the audience on the relevance of sports in promoting peace in the contemporary society. In her speech, the representative from the Government of Kenya stated that, sports created a forum where people could come together as teams and play according to the rules of the game. She added that the rules of the game are founded on values including, but not limited to, teamwork, respect for the other and harmony all of which are important for the promotion of peace among competing groups.

During the morning session, the participants were engaged in several sports activities including aerobics, football, sitting volleyball, and 100 meter races. The program also incorporated various presentations of performances and experiences from different organizations. What was fascinating about these activities is that all people including persons with disabilities came out to show case their skills. They demonstrated how they play Volleyball while sitting down and everyone was happy to cheer them. This was to show that the responsibility of promoting peace and development requires the joined efforts of every individual regardless of their physical status, social, economic or religious background.

This memorable day was the reflection of a promising future of possible collaboration between New Humanity and UNESCO in the endeavor to promote peace and development.