United World Project: a dream of fraternity is born 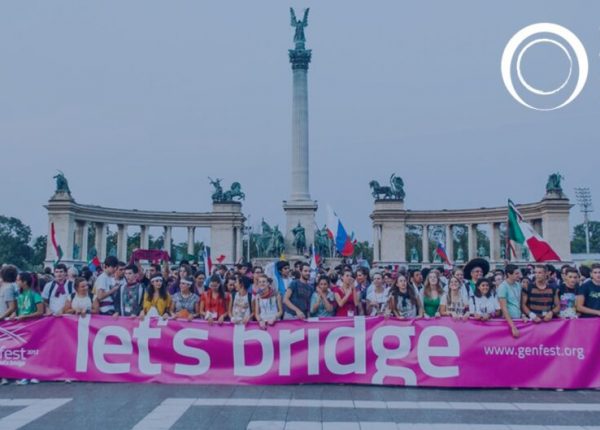 On the International Day of Human Fraternity, we want to start celebrating the UWP’s 10th anniversary, since the project’s aim is to promote a culture of fraternity around the world. Its anniversary will be on 1st September 2022, ten years after its official launch. Once a month, we will be looking back on its origins and on the stories and events that have marked these 10 years of common history!

It was 2011. The world’s population reached 7 billion. Everyone watched as the protests of the so-called ‘Arab Spring’ broke out. The Syrian conflict began. A tsunami hit the coast of Japan, causing thousands of deaths and the Fukushima environmental disaster. The Iraq war came to an end. Within this historical framework, a group of young dreamers from different backgrounds started planning a global event that would take place between August and September 2012. The protagonists of this story are the Youth for a United World of the Focolare Movement. Young people of different cultures, religions and nationalities, united by the same ideal: making humanity one family.

They wanted the title of their meeting to be ‘Let’s Bridge’. By that, they meant building bridges of fraternity as opposed to walls. For this reason, Budapest, the city crossed by countless bridges on the Danube, at the meeting point between Eastern and Western Europe, seemed the most suitable location.

They decided to work hard in order to speed up the promotion of a culture of peace, of positive welcome and of care among communities, institutions and even among the peoples and nations of the Earth. Their message would be heard by an audience of about 12,000 young people gathered at the László Papp Budapest Sports Arena, and by thousands of others watching the event on the web and on TV from the four corners of the world.

The programme was inspired by their own life experiences in many countries. From Mexico, ravaged by drug cartels, to Thailand, submerged by floods. From Egypt with the protests in Tahrir Square to the refugee camp of Maramvya, on the outskirts of Bujumbura, in Burundi. They were all real-life stories about people who chose to go against the tide:  to not just fight poverty but promote a communion of goods; to not just protest but get involved in active citizenship and in favour of the common good; to forgive instead of taking revenge; to foster long-term solidarity beyond emergencies; to choose dialogue and openness instead of polarisation and prejudice.

From that stage, they wanted to prove that concrete love overcomes all barriers, solves every problem, comforts every pain, heals all divisions.

Yet, it was not enough. They wanted to involve everyone in that adventure. Everyone – possibly the Earth’s 7 billion inhabitants! But how to do that? They announced it on 1st September 2012, from that very Budapest Sports Arena. Maria Giovanna, from Italy, took the stage: “Over the last few days, the Budapest Arena has welcomed the whole world for this experience of fraternity – now we want to throw open these doors, together, to reach every person, all over the world. We propose a global Pact of fraternity to all. We launch the United World Project!”

A global collection of signatures kicked off to set the seal on each person’s commitment to work in favour of fraternity locally, nationally and internationally. Plans were laid out for a United World Watch to be established in order to chart and promote experiences of fraternity of individuals, groups and institutions all over the world – while also aiming for the United World Week – the fraternity expo organised by the Youth for a United World since 1996 – to be recognised by the United Nations. Then, a special link was declared with the African continent, so that the whole of humanity could be enriched from the strong sense of community that Africa bears witness to. Those were the first steps of the UWP.