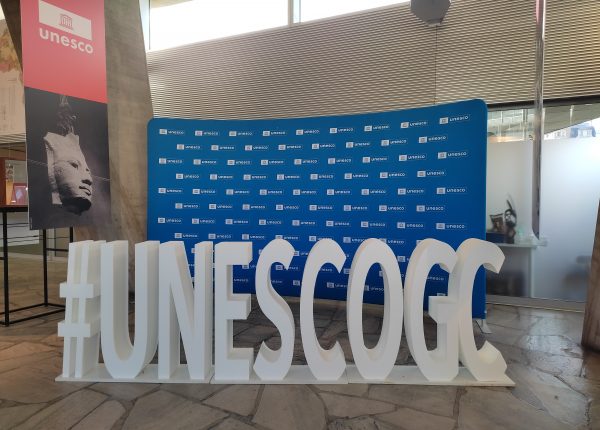 New Humanity NGO, took the floor during the 41st session of the UNESCO’s General Conference to stand for Global Citizenship.

In the afternoon of Monday, November 15, 2021, during the 41st session of the UNESCO’s General Conference, the non-governmental organization New Humanity took the floor in the General Policy Debate to share the commitment and the work that children, youth and adults have been doing in terms of global citizenship, through the reading key of a united world, that is, fraternity. 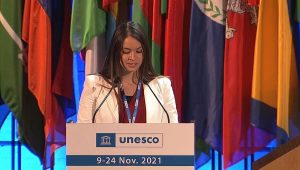 “We would be taking a step forward if we all strive to love each other’s country as our own; if we all commit to an integral ecology by taking respectful and caring actions towards our fellow human beings and towards the nature on which our lives depend. This concerns us all, regardless of our beliefs. Whether we are young or old. Whether we have power or not”.

The 41st session of the General Conference of the United Nations Educational, Scientific and Cultural Organization (UNESCO) opened at the Organization’s Headquarters in Paris on Tuesday, 9 November 2021 and its work is expected to conclude on Wednesday, 24 November 2021.

The General Policy Debate took place from Wednesday, 10 November morning to Monday, 15 November afternoon which was followed at the end by the reply of Audrey Azouley the reelected Director-General.

Why was this participation important?

Non-Governmental Organizations (NGOs) in official partnership with UNESCO had the possibility to send their organization’s representative(s) to the General Conference as observers at the session, and some NGOs requested to address the plenary meeting of the General Conference. New Humanity was one of the NGOs who asked to present a statement on matters within their respective competence during the General Policy Debate, and had also a statement to be presented on the SHS commission, with the consent of the presiding officer.

To have the floor is important because it allows not only to present the relevant actions of the organization itself, but also to know the work of other organizations or projects with which synergy can be created, in order to fulfill together the objectives of the 2030 Agenda.

On this occasion, New Humanity presented three general projects that are carried out by a particular promoter (children or youth), but that at the same time are built on the basis of intergenerationality, an indispensable characteristic for the organization.

At the conclusion of New Humanity’s speech, an invitation was extended to the Global Citizenship Forum, which will be held on December 6 and 7, 2021.

The NGO Liaison Committee of UNESCO, which gathers more than 400 NGO partners of UNESCO like New Humanity, organizes Forums on themes of interest to UNESCO. New Humanity is fully committed to Global Citizenship and after 2 years of work, with UNESCO and other NGOs interested in the subject, a Forum will take place online on December 6 and 7, 2021 from 2:00 to 6:00 pm.

More information and registration form can be found here: http://www.ngo-unesco.net/forum_global_citizenship.html